I spent the night of the challenge in special amounts of pain on the couch, willing my stomach to stop trying to eat itself and most of yesterday wishing my stomach had been successful so other regions didn’t have to deal with it

END_OF_DOCUMENT_TOKEN_TO_BE_REPLACED

It’s been a while since I wrote anything. Life … has been pretty busy, I broke my ankle a few months ago, actual work has been extremely demanding and my dog ate my homework, which is really strange cos I have a cat. So when I received a message on facebook from a follower stating that I had 7 days to eat something strange or huge or they would leave, I realised how long it had been between eats. Also that I’ve been neglecting my readers, followers and creativity.

END_OF_DOCUMENT_TOKEN_TO_BE_REPLACED

I like to think myself pretty lucky that I have a high tolerance for spicy food dishes.If I didn’t, then I would be missing out on so many awesome meals and choice, especially in Asia.

END_OF_DOCUMENT_TOKEN_TO_BE_REPLACED

Blood Jelly was one of the original delicacies I had investigated for my Vietnam List, but had somehow lucked (or chickened) out of trying.

So, when I ordered the Spicy Pork Noodle Soup from one of my favourite Vietnamese haunts, Dong Ba on Hopkins st Footscray, I thought nothing of it.

END_OF_DOCUMENT_TOKEN_TO_BE_REPLACED 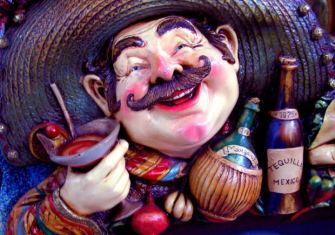 That’s about the extent of my ability to speak “Mexican” unless you throw in the word nacho, taco and tequila…

Alas I’m getting side tracked…

As far as I can remember dishes like Tacos, Nachos and Burritos were always on the menu as a quick throw together meal, and el cheapo trips to Taco Bill in my Uni days I can look back on fondly… Pancho Villa and a free sombrero anyone?

Recently I was planning my birthday dinner and was on the hunt for a good value for money cuisine option that would suit a multitude of tastes. With this in mind I stumbled across a plethora of Mexican restaurants…

I’m not talking about chain style restaurants like Taco Bill or Montezuma but, funky, hip and dare I say trendy places that all spouted the line of real Mexican!

When I asked some advice about where to go, it seemed that everyone had an opinion on the best mexican in Melbourne, and all had a restaurant that they either frequented regularly or were dying to visit.

So I’m posing some questions… Is Mexican the new cool kid in the food playground? Or are people’s restricted budgets driving them to seek cheaper yet still fresh alternatives?

Gone are the days when Mexican (thanks to Old El Paso $5 kits) is a quick at home fix, or a cheesy greasy fast food style restaurant option…

Why? Finding a mexican restaurant that would take 20 people; without having to go with a set menu was a task (and story) better suited to another blog!

I did get to a funky place called Touche Hombre for lunch, which I have to admit was fantastic!

I will definitely be returning… mmm Margarita in a mug! Mugarita?

Perhaps it can be my “best Mexican in Melbourne” restaurant, but I’d better try the others first!These are some that were suggested to me as alternatives:

I’m sure that there are plenty more… let me know so I can try them out!

Down here in Mui Ne on the south-east coast of Vietnam they are quite the delicacy and are rather delicious!

END_OF_DOCUMENT_TOKEN_TO_BE_REPLACED

Pho is a delicious… no INSANELY DELICIOUS soup, and can be prepared in many different ways. Most commonly in Melbourne it’s referred to as Pho Bo (Beef), Pho Ga (Chicken) or a vegetarian variety (I don’t bother with vego as the broth is made from beef anyway), and the essential make-up of the dish is generally the same.

END_OF_DOCUMENT_TOKEN_TO_BE_REPLACED

Ethiopian food is something new to me…

I need to recommend a certain restaurant I REALLY enjoyed the other day! 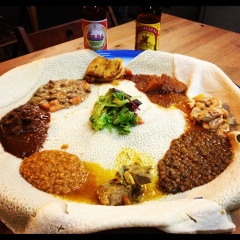 Highly recommended by various Internet sources, I found myself at “The Abyssinian” in Kensington one Friday night who serve up Ethiopian and Eritrean cuisine “From the Horn of Africa”. It was suggested to order the chef’s meat platter selection, to which we were greeted with an absolutely MASSIVE plate of food…

Spicy lamb, beans, white lentils, goat, dark lentils, chicken casserole, roasted spicy pumpkin, and fish all served upon delicious Injera bread that has the consistency of a bubbly thick crepe with a tart but not too strong vinegary but also sweet taste. I’ll have to eat there again to remember all the names…

Some of the spices are were not for the faint hearted in fact the lamb was pretty darn hot on the spice-o-meter, but all the meat just fell apart in the mouth, even the goat which I have previously found gamey and tough, was not chewy in the slightest.

The entire meal reflected flavours that have been honed to perfection for donkeys years, which i would describe as comforting food that feeds the senses. The colours, the smells, and the tastes all blend together, and it was impossible to find a dish on the plate that didn’t go beautifully with all the others…

Except the salad, not sure it belonged there with what tasted similar to an Italian style dressing poured over it… That said you could have rolled me down the street afterwards from the amount of food consumed so there’s not much point getting hung up over a few lettuce leaves!

There is also something incredibly satisfying about not having to use cutlery to eat… The bread that covers up the plate is your cutlery and does a better job than a spoon would in mopping up all the sauces… my top also did a great job, bibs would be a great idea when eating with your hands, especially if you’re as clumsy as I am! 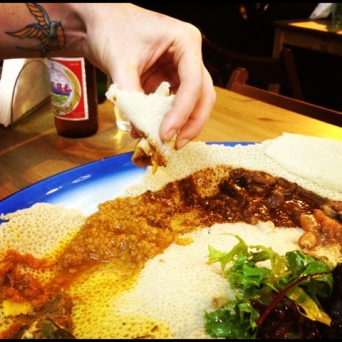 Check out The Abyssinian on Urbanspoon: