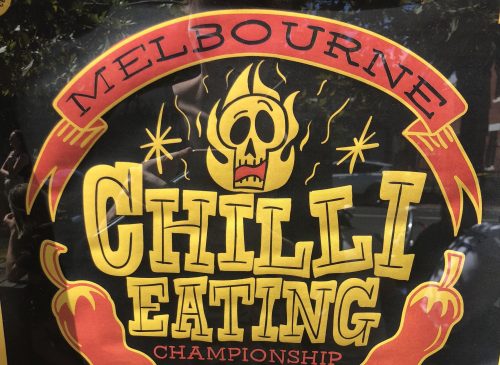 What is it about watching people inflict pain upon themselves that we sometimes find so fascinating, nay… entertaining?

I believe that a healthy percentage of people who follow my silly antics do so because they enjoy seeing someone else try something they wouldn’t dare. Perhaps a mixture of schadenfreude and a morbid curiosity?

Reflecting upon my time at the 2018 Melbourne Chilli eating championship at the B.East on Lygon st Melbourne yesterday, it brings a gleeful smile to my face and a shudder at the pain I witnessed. Self inflicted pain, all in the name of becoming the Melbourne Chilli Eating Champion.

Watching grown humans eat chillies (with Scoville’s in the millions), vomit uncontrollably due to the pain of burning capsaicin. Witnessing their noses run with waterfalls of chilli filled mucous and their eyes cry tears harder than the first time I watched the notebook, while the crowd cackled, cheered and booed with glee, I couldn’t help thinking that gee humans are weird.

Yet here I was heckling and shouting with the crowd, sneakily wishing I too could be up there with the madmen and women.

The event was split into two heats (pun intended), where 10 competitors had to go through rounds of chillies ranging from jalapeno (very mild) to reapers and scorpions (total insanity levels of hot). There were also spicy chicken wings, hottest in the world corn chips and even chilli tequila shots!

Some people rocked back and forth moaning in pain, some people got the hiccups and others just sat there looking like they questioned their entire life’s existence.

Full disclosure: I couldn’t enter this year as for the past couple of weeks I’ve been quite crook in the guts. I don’t feel like giving myself a stomach ulcer or fissure for the sake of research quite frankly. However, I do wonder if I’d even get past the first round anyway!

It’s hard to put into words the frenzy that people get into watching an event like this. The sheer wonder that fills us when we watch people able to eat ghost peppers, Carolina reapers and Trinidad scorpions without breaking a sweat, when the majority of us struggle to get past mild at nandos fills the room.

We want them to succeed, but we also want to watch them barf. I know you do too… so click the image below to view my video wrap of the 2018 Melbourne Chilli Eating Champs!